Dedicated to all the people of the world, so that they might finally validate each other’s concerns, and move away from conflict.

Dedicated to all the counselors, who daily set aside their concerns, to reflect and thereby validate the concerns of another.

Thanks to the Institute of General Semantics

Dedicated to the Institute of General Semantics for their pioneering research in the area of language and communication.
Visit them online at: http://www.generalsemantics.org/

The basic fallacy of the ‘is’ of predication has to do with its expressing a ‘partial identity’ . . . since the quality becomes fallaciously projected onto the object, situation, person, etc., in a denial of the projectional and transactional process involved. – D. David Bourland, Jr.

“In a case where most people might judge themselves harshly by saying, I’m not good at math, I would advise them to say instead, ‘I got poor grades in sixth grade arithmetic,’ or ‘I did better in other subjects than I did in math.’ With this sentence structure, I feel that people will not condemn themselves forever to fail at problems that require mathematical skill. Rather they will recognize that they simply report on past experience, without predicting that the same thing will inevitable, or even probably, happen again. In this way, we can avoid the ‘self-fulfilling prophecy.’ ” – D. David Bourland, Jr. 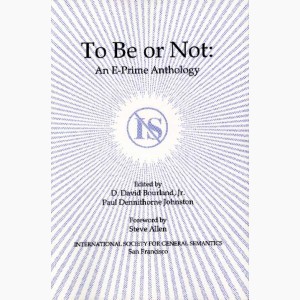